Fury in Palestine, Bahrain Over ’Deals of Shame’ with Israel 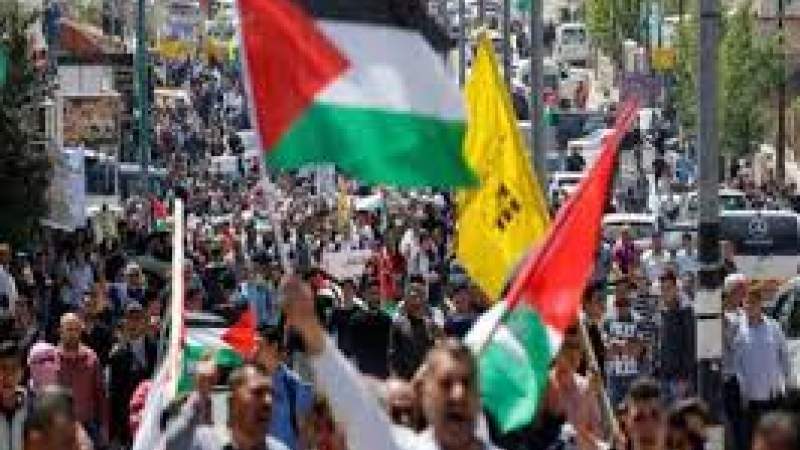 Palestinians and Bahrainis have reacted with anger to the US-mediated normalization agreements that the regime in Manama and the United Arab Emirates (UAE) signed with Israel.

Palestinians and Bahrainis have reacted with anger to the US-mediated normalization agreements that the regime in Manama and the United Arab Emirates (UAE) signed with Israel.

The texts of the accords did not mention any suspension of the Tel Aviv regime’s plans to annex the occupied West Bank and had little to say about the Israeli-Palestinian conflict.

Palestinians rallied in the West Bank cities of Ramallah, Nablus and al-Khalil (Hebron) as well as the besieged Gaza Strip to denounce the Emirati and Bahraini deals with Israel.

Clutching Palestinian flags, they also carried banners reading “Treason,” “No to normalization with the occupier,” and “The agreements of shame.”

“We call on the UAE and Bahrain to backtrack from the agreement with Israel,” said al-Khalil protester Mohammad Mohanna. “At a time where companies in the West are boycotting Israel, two Arab countries are about to make trade agreements with it.”

Gaza demonstrator Emad Essa told the Al Jazeera broadcaster that the blockaded coastal enclave is home to “hundreds of Gazan youth who have lost their legs and got crippled for life for just for merely protesting against the Israeli blockade.”

And in the West Bank and Jerusalem [al-Quds], the Israeli bulldozers continue to demolish Palestinian homes and ethnically cleanse the Palestinians out of their villages and cities on a daily basis,” he said.

“That’s just the tip of the iceberg of Israeli crimes against the Palestinians, and the UAE and Bahrain somehow chose to reward Israel for these crimes by making agreements with it. The deals are stains of shame on the forehead of those leaders who sold the Palestinian cause for a very cheap price,” he added.

In a statement carried by the Wafa news agency, Palestinian President Mahmoud Abbas’s office said peace in the Middle East would not materialize without the recognition of the Palestinians’ right to statehood.

“Everything that happened in the White House … will not achieve peace in the region as long as the United States and the Israeli occupation authority do not recognize the right of the Palestinian people to establish their independent and continuous state on the June 4, 1967 borders with East Jerusalem [al-Quds] as its capital, and resolve the Palestinian refugee issue in accordance with Resolution 194,” read the statemen.

“The main problem is not between the countries that signed the agreements and the Israeli occupation authority, but with the Palestinian people who are suffering under occupation.”

Additionally, Palestinian Liberation Organization (PLO) Secretary General Saeb Erekat said the normalization agreements were tantamount to signing off on Trump’s self-proclaimed “deal of the century.” The controversial scheme, which was unveiled  in January, was a green light for Netanyahu’s plan to impose its “sovereignty” over West Bank settlements and the Jordan Valley — some 30 percent of the West Bank.

“They never mentioned the 1967 borders. I know the White House, and this is the height of the campaign season. There isn’t a word of this which wasn’t precisely specified by the Americans,” Erekat underlined.

Jibril Rajoub, secretary general of Fatah political party, called the normalization accords “a disgrace,” stressing that “what is happening today in Washington is a form of collapse of the official Arab order.”

“The international absence from attending the agreement’s signing… is evidence of the world’s belief in the necessity of resolving the conflict in accordance with international law,” he added.

During the signing ceremony, the Gaza-based Hamas resistance movement fired two rockets into the occupied territories, indicating in a statement that the attack was in response to the peace treaties.

“The normalization agreements between Bahrain, the UAE, and the Zionist entity are not worth the paper they were written on,” Hamas said, adding that the Palestinian nation “insists on continuing its struggle until it secures the return of all [of] its rights.”

Hamas spokesman Sami Abu Zuhri also emphasized that the Bahrain and UAE agreements would not bring peace, saying, “Peoples of the region will continue to deal with this occupation as their true enemy.”

Senior Islamic Jihad official Mohammad al-Hindi said, “The Gaza rockets are a message that this great vanity of the United States and Israel will be shattered by the Palestinians and that the final word is for those in the right.”

On Tuesday night, Bahraini people took to the streets to protest the normalization accords.

Social media and political activists shared images of the rallies online, stressing that the Bahraini nation views normalization with Israel as treason.

The Bahraini opposition Al-Wefaq National Islamic Society also tweeted, “At the moment of treason and when they sign on the conspiracy against al-Quds and Palestine, we shout God is Great, God is Great.”

The spiritual leader of Shia majority in Bahrain, Ayatollah Sheikh Isa Qassim, has said in a fatwa (religious decree) that any normalization with the occupying Israeli regime is forbidden.

Sheikh Isa Qassim said in a recent statement that each of the Arab regimes, which has normalized or is normalizing relations with the Israeli enemy, knows that this contradicts the will of God and that of the nation, and that this would “represent a submission to both the American and Israeli will.”